Please Save Us from the Darkest Timeline

I have never been as upset about television as I was yesterday afternoon.

A news item blasted round the twitters and tumblrs notified me that my favorite show was going to be off the mid-season schedule and while this didn’t mean cancellation it also didn’t mean anything good.  Sure, I’ve had favorite shows get cancelled and subsequently had my heart harden, which made it harder to accept watching new shows everyone else loves until they’re a few years into their run or completely over just so I don’t risk getting really into something that’s just going to be callously ripped away from me and burned off at odd times in the middle of summer when nobody really watches tv anyway.

Despite all this, I fell head over heels for Community immediately. 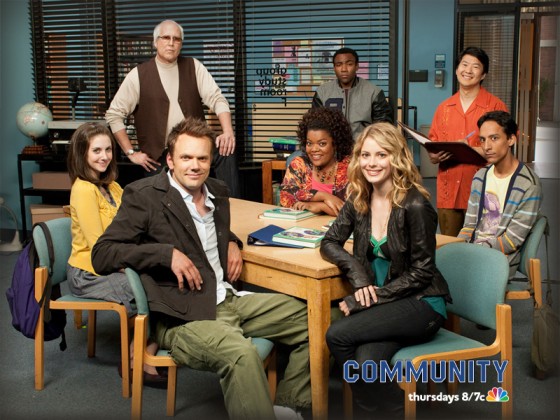 For me. the first episode of Community was appointment television. I’d long held a crush on Joel McHale and it grew with every episode of The Soup and every appearance he made on a morning radio show I listened to at work (though the new, fitter, tanner, Seacrest-ier McHale is less my thing, go figure).  My crush reached its peak when he hosted the Northwest Regional Emmys and not only announced awards that went to my class but also lightly ragged on a television package that caused a quite bit of grief amongst us.   Naturally, a sitcom starring Joel McHale rocketed to the top of my “must watch” list and even better the show was set in community college and was created by Dan Harmon, the guy behind Channel 101 (Yacht Rock and House of Cosbys came from there!). Community seemed like it was carefully designed for me and, well, me.

I was not disappointed.  Community won me quickly with plot lines and characters that were clever, hilarious and winning in a way that didn’t feel saccharine, a quality I feel in a lot of media people describe as ‘winning’ that instantly turns me off (i.e. Juno, Glee, Little Miss Sunshine).  The early episodes had their growing pains, but they were still very funny and underneath all the jokes about insane Chinese-American Spanish teachers, a lovely little comedy about forging a family was born.

The show is not just called Community because of the type of college our main cast are enrolled in, it is also a reference to the nature of human relationships and how we form our own communities once we’re out on our own.  Sure you’ll always have your family (for better or worse!), the community you’re born into, but the “community” of Community is about the one you create. The characters on Community may be thrown into crazy “TV-only” scenarios (KFC Space Shuttle Simulators, for example) but at the end of an episode things usually cycle around to being about trust, friendship and just being there for each other.   There is something infinitely special about a show exists in a world of the aforementioned KFC Space Shuttle and at the same time can make poignant commentary about the melancholy and non-drunk-driving-related dangers of alcohol (s2 ep 10 Mixology Certification).  Plus, Pierce’s Twitter feed reads like text messages from my dad. A+ level accuracy there.

I’ve read a few articles today about what Community does wrong.  What I am noticing about a lot of the complaints in these lists are not really the show’s fault.  Community didn’t choose to schedule itself against The Big Bang Theory or American Idol and it certainly is not in charge of its own promotion, those balls are in NBC’s court.  An aspect of the show itself, that it can control and that people seem to complain about the most, is that Community is hard for new viewers to get into with all of its in-jokes and meta-commentary.

Perhaps I am being a little too nice to the rest of the television-watching population out there, but I don’t think the show’s in jokes are completely inpenetratable. With one study group greeting you’ll being to understand the oddities of Dean Pelton. Witnessing Troy and Abed’s handshake (mega mix style in the youtube video above) is the beginning of an easy path to understanding their friendship. And it takes only a few lines of context do get what characters mean when they say someone “Britta’d something.”  I get what “Bazinga” means and I’ve seen about 3 episodes of The Big Bang Theory and one of them only because they mentioned Montana.

As for the meta-commentary complaint, Community may be a show for former children with television babysitters by former children with television babysitters: to get every joke a little bit of cultural currency is required.  However, Community’s popular culture references never seemed too out of reach. They aren’t crazy obscure for the most part, and I would argue most people have seen or at least recognize the genres and films referenced.  The most obscure film referenced I can think of is My Dinner with Andre, and if “Critical Film Studies” (s2 ep 19)  led a few people to add it to their Netflix queue, then all the better!  Further I’d argue, the gags on Community are usually funny even if you don’t get the reference, making the full joke a nice little easter egg for people who get all the layers.

One of the episodes of Lost often regarded as the best, “The Constant,” is all shifting timelines catching up with each other.  A stellar episode of Breaking Bad, “Fly,”  is an excellent and very well received bottle episode. These are both more recent examples, but they’re both from series which are  largely considered “successful.” Adjustments to traditional narrative structure is certainly nothing new, Community  just draws a little more attention to it than your average sitcom.  The people in the coveted 18-34 ratings demo have literally had television around them their entire lives, even if they don’t know the full sitcom vocabulary, they should at least recognize the tropes.

Some of my favorite Community episodes are reference heavy (s1 ep 21 “Contemporary American Poultry), genre heavy (s2 ep 16 “Intermediate Documentary FIlmmaking,” s2 ep 11 “Abed’s Uncontrollable Christmas”) and have ridiculously clever structures (s3 ep4 “Remedial Chaos Theory).  I don’t think that this necessarily makes them inaccessible or hard to love though, because while these episodes are genre, reference and meta-heavy that’s not all they are.  What is being overlooked in the recent criticism of this series, I believe, is that while the show can lean heavy on mass media or narrative commentary, it fills in all the remaining space with tons of jokes, gags, Spaceman Paninis and Black Hitler:

Community may sometimes be too clever for its own (ratings) good, but it is also really funny. In has reached Anchorman levels of reference and quotation amongst myself and my other “in the know” friends (a rare feat!). The only show on TV that I have a competing laughs per minute (LPM, duh) is Parks & Recreation, which is also excellent.*  I’ve read a lot of columnists and commentors wondering aloud today if Community is just “too clever to find an audience.” Arrested Development was also deemed “too clever” and also lasted three seasons, until the timeslot was shifted, the order was cut down and it was cancelled, so you can see how ominous “too clever” can really sound.  Community makes smart jokes sometimes and finds new and interesting ways to tell stories, sure but it also makes plenty of funny, dumb jokes.  You can’t cast Chevy Chase and not write a broad gag every few episodes where he falls off of, onto or into something. It is just not done.

So where does that leave us? I suppose that if you’re not watching the show it may sound daunting to just jump in and begin watching from here on out.  I do think most anyone would be able to catch up with the characters and relationships fairly quickly, but just in case I’ve made a list of episodes I consider to be good introductory points.  Some of these are genre-y, but I think knowing its influences is part of eventually loving Community and what is being referenced (Goodfellas, the films of John Woo) should be modern enough currency.

Episodes to Sample if You Aren’t Already Watching Community

If you’re not watching Community, maybe give it a shot? It has to be better than 85% of anything else you could watch instead, and since it is on Hulu you can watch it whenever you’d like. If you are watching Community tell your friends. It isn’t enough that the internet is in love with this show. Oh and people not watching this show? When you give discover it on DVD or Netflix streaming a few years after it is cancelled and immediately fall in love and then begin bemmoaning its cancellation? You totally deserve the “Told ya so.”

Six seasons and a movie!