I go to Seeley Lake with my extended family to meet up with another extended family every summer.  I’ve been going my whole life, they’ve been going for more than 40 years.  That is dedication.  I spend the week reading on the beach, sitting by a campfire,  drinking a little whiskey and well that’s about it. Paradise! 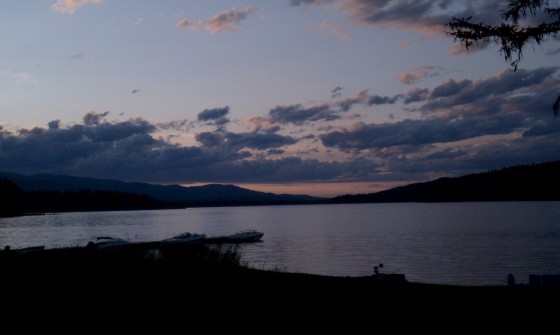 The one thing we do every year as a huge group is the Annual Hot Dog Roast and Pot Luck.  Somehow along the way we started putting someone in charge of this get together and that person has to plan an activity for the evening post-dinner.  At one point the kids just played games together after dinner and the parents ignored us. These were the good old days when nobody had to plan anything because kids can amuse themselves with tree stumps (we used them as podiums and we were statues and the game was to stay quiet and not move until it was your turn… I think we were tricked into thinking this was a game and not just an elaborate rouse for some peace and quiet). Later we had a kids’ talent show with prizes, but this ended the year there were three separate lip sync/dance routines set to “Lucky” by Britney Spears.  So now somebody is put in command and we have organized games.  After 12 years of this, my name finally came up and 2011 was the year my brother and I were placed in charge of the festivities.

Of course we were chosen in 2010 so I had a full year to forget I had anything to plan.  At the end of June I got this text from my brother, Jared:

To which I replied:

Let the mild-panic begin!  Jared and I had absolutely no ideas.  Our number one contenders at one point included:

Our ideas were all winners, clearly.

After many a late-night googling of group games, what seemed like a thousand crappy team-building websites, a lot of suggestions from friends and a lot of help from my parents, Jared and I settled on Folf, or rather, Mini-Folf.  Mini-folf would be played with regular frisbees and not folf discs and have a much smaller playing field. To get ready, I did what I do best (or at least what I do better than preparing folf courses) and designed a logo:

In the last few weeks leading up to vacation my mom got us supplies (thank god for her, seriously) which included 40 frisbees for our contestants and flags and fabric to mark the holes. When we got to the lake, Jared and I set about constructing a 9-hole folf course around the grounds. 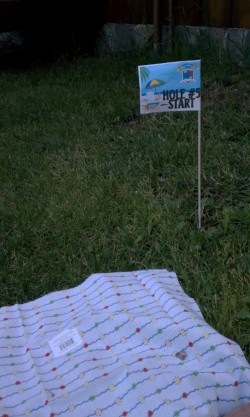 Our course wrapped around cabins and across the beach and was marked with numbered flags and matching fabrics.  We even made up a par for each hole.

After the BBQ ended, we split our players up into pre-determined teams, gave them their frisbees, staggered them on the course and stood back and watched, only really stepping in to help when the next hole wasn’t readily apparent.

Frisbees flew all over, but once people realized the way you had to throw it was different than a regular folf disc, the scores on the holes started to drop and our contestants were flying through the course.

We lucked out too, the night before when we plotted the course the winds were going crazy and Jared and I couldn’t land a frisbee on the fabric squares to save our lives.  The night of the Hot Dog Roast the weather was absolutely perfect.  No winds, not chilly, nothing but pretty skies and a light breeze off the lake. 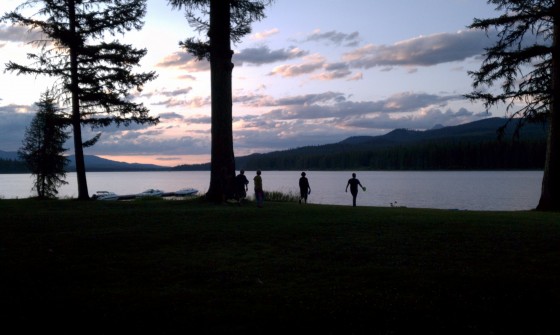 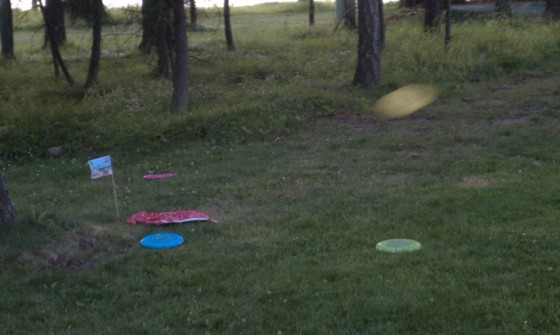 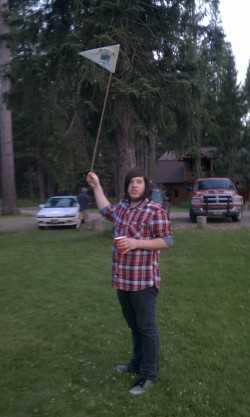 Jared with one of our “Person in Charge” flolf flags. They were later turned into excellent marshmallow roasters. 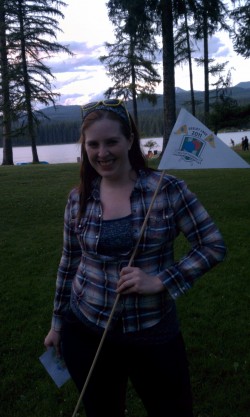 I ALSO had an “In Charge” flag. Total Boss of Folf right here. This one met the fate of “4 year old throwing it into a lake”.

When everyone finished we tallied up the scores, averaged them and found our winners.  The winners got first pick from our wonderful table of prizes which included classy selections from the dollar section at target, leftover giveaway items from places my family members worked, watches from a woot! sale, zinc sunscreen and other goofy odds and ends.

In case you were wondering, the winners were: 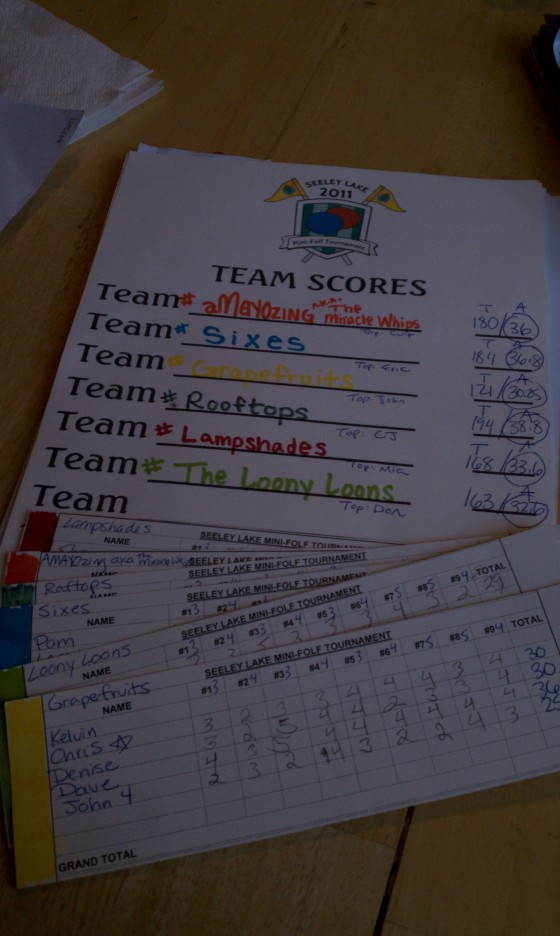 GO TEAM GRAPEFRUITS. Jared named the teams.  Team aMAYOzing AKA The Miracle Whips is based on a conversation we got into about how much Miracle Whip sucks and also tastes like butt.  Jared disagrees, he is obviously wrong.

Team Grapefruits won and Mini-Folf was a rousing success! I got several awesome compliments on how well it worked out, which I ate up considering the last-minute stress of putting it all together.  Again, another huge thank you (and about 700+ other huge thank yous, if I am being honest) goes to my mom, because without her help, time and guidance in setting this all up, Jared and I probably would have just gone with the drinking games, do what you know, etc.